Race day at Pikes Peak is always a very interesting ordeal, as racers we have to be through the gates before 3am when they let the spectators start up the hill to their viewing points. Luckily they let us bring our bikes and gear up the night before so it's just getting ourselves through the gate and to the pit area, then it's nap time for a couple of hours while all the spectators drive up to their spots.
Once we got the bike and gear unloaded after my nap we went up to watch the craziness that is Pikes Peak Race Day unfold and figure out when and where we should get all staged up. Race day is the only day that we get to run the entire course and we run the course hours later than we get to practice on it so the course is always different on race day. It's always a good time to get to run the whole thing and take on the challenge of the course being different!
Middleweight runs second to the last of the motorbike divisions so we had some time to hang out and watch some of the other riders take off and get ourselves together for our run up the mountain. Had some words with Lacy and she told me to give her hell, who am I to argue?
Once I got suited up and got ready to get on the bike we got the camera rolling and the rider in front of me took off and I was up next. Then all of a sudden chaos as the rider in front of me was riding backwards back down to the start area and they lined him up next to me, waited a few minutes, then let him go again. I put my head down and just focused on getting back into it and waited for the flagger to give me a green flag to go.
Then he pointed the flag, I gave him a nod, and the flag was waved. I'll let my video do the rest of my talking for the run here:

At the top I made it across the finish line, slowed down on the dirt, and around to the rocks that we lean the bikes against up at 14,110 feet. A few fellow competitors were there cheering me on and smiles were everywhere along with some stories of everyones run. Once I got the bike parked and got the camera stopped everything kind of set in and I put my head on the rocks and had a moment for our buddy Carl. When I got back up I was greeted by one of the workers that was helping keep me calm on Thursday and by some fellow racers Jose and David who were pitting with Carl. Lots of tears, smiles, and laughter were had. Then the long wait till we could ride back down to see our families, friends, and fans!

This race is like no other race here in the states, we take risks to a certain point but leave some room for error, but that is a very thin line at times... To cross the finish line at this race is something very special and is hard to explain what it's like. 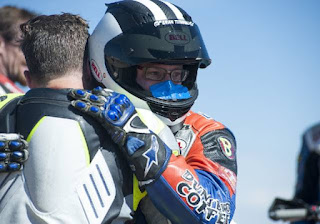 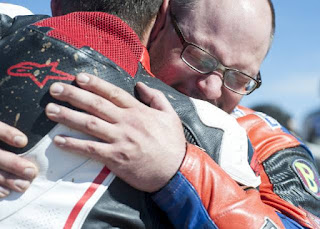 Adam's time up the 12.42 miles and 156 turns was a 11:25.6, more than 51 seconds faster than last year on the same bike! We are very happy with that after all the heartache leading up to race day!
We will leave race day with some photos of the craziness that is Pikes Peak, we hope to give her a go again on a bike that is competitive sometime in the not too distant future. 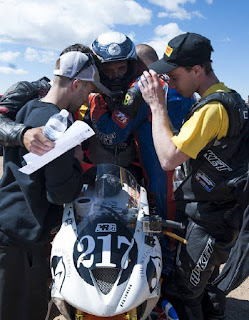 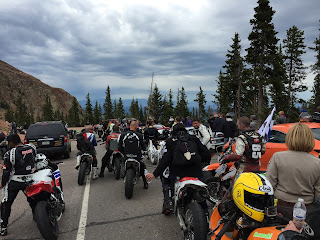 Posted by Unknown at 9:38 AM No comments:

So Adam is cleared to race the PPIHC, the Supertwin is ready to go with the stock engine in it, so lets get loaded up and get down to the Lone Duck Campground already dammit! Let's Roll!
So this is where I have to throw out some big thanks to my buddy Brandon "Fo$" Fosbinder, the dude let me use his RV Toy Hauler for the week, tested an Ergon MTB grip on his Supermoto to see if the grip would hold up, loaded and unloaded my bike and gear all week out of my pickup, and literally helped with everything and anything including an engine swap Tuesday morning! You sir kick some serious A$$!!!

I was able to get some light rides in on the Ducati Monster back and forth to work to see how the wrist would hold up, and it was okay with a few aches and pains but tolerable. So it gave me an idea of how riding the Supertwin would be, but nothing compared to the real deal Tuesday morning on the mountain. 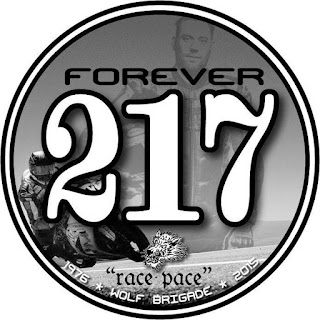 Posted by Unknown at 9:54 PM No comments: